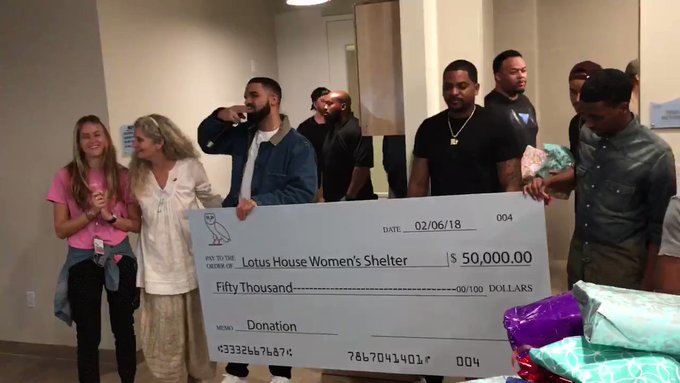 Just days after making several large donations in Miami, the 6 God paid an unexpected visit to Lotus Village, the city’s only homeless shelter for women and children. Drake showed up with toys and games for the 140 kids at the facility, $150 Target gift cards for the women in the shelter, as well as a $50,000 check to go towards the nonprofit’s expansion.

.@Drake presented a mound of gifts to the women and children of @LotusHouse1 followed by a donation of $50,000! #Drake #Miami

The Lotus Village donation marks Drake’s latest charitable act within Miami this week. He recently donated $25,000 to a Miami high school, purchased $50,000 worth of groceries for strangers in Miami Beach, and also gave a University of Miami student $50,000 to go toward her tuition. The generous acts are rumored to be a part of his upcoming music video for his record-breaking single “God’s Plan.” Which is a pretty fitting and admirable stunt.

Drake filmed a portion of the “God’s Plan” visual at the aforementioned Miami high school. After he shot the scenes and made a donation, the Toronto rapper spoke to the students and mentioned something about a forthcoming album.

So, Drake album within the next year or so? We’re ready.

While we wait for more information about the project, you can check out some of the photos from Drake’s surprise visit at Lotus Village below.

Lotus House will be participating in Baynanza 2023! Check back at this link with more information on how to sign-up.

BY ALEX BROWNING AUGUST 30, 2022 MIAMI (WSVN) – The mayor of Miami is offering some help for the homeless with a donation they hope